I lift up my eyes to the hills
in search of perspective.
Too often I forget to really see the hills, and the sky.

I lift my eyes from the road and the traffic before me
glancing out the car window for another view of scenery.
Is that building new? When did the trees start changing colors?

I lift my eyes from the computer screen–
this hypnotic rectangle–to clear my vision.
There are people to see, there is laughter to share.

My help and my hope come from the LORD
who shifts my perspective, who captures my imagination,
who rescues me daily by grabbing my attention.

Tonight my daughter tiptoed downstairs, teddy bear held tightly under her chin, and she silently climbed onto the couch where I was sitting in order to lay her head in my lap and fall asleep. It had been a long day, and I know that she had a case of post-vacation exhaustion. To top it off, a mild scolding from her mother (truly it was mild) led to a cascade of tears over bedtime loneliness, sibling unfairness, and a plague of insecurities.

I used to do the same thing as a child: I would keep myself awake past bedtime with imagined nightmares, listening to the (real) sounds of mice skittering through the walls. When I reached my limit of fear, I would sneak down the stairs, pausing on the last step to stare into the darkness for possible monsters or mice, and then I would run across the kitchen floor, through the dining and living rooms, and into my parents’ bedroom for the reassurance that someone was awake (i.e., I woke my mother) and keeping watch over me.

At night most of all, against the nightmares of our minds (real and imagined), we crave the protection of a loving touch. In the loneliness of midnight, we cry for a caring presence. When insecurities loom large and the weight of the world presses in, we seek the reassurance of a watchful mother. At night most of all–whether the day has gone very badly or very well–we need one last reminder of comfort and grace before we can rest.

Sometimes our nights are actually terrors in broad daylight: Poverty that knocks at the door, violence that breathes down the neck, distrust that shadows every move, monsters of war between countries and persons. Some days are endless nights, with no glimmer of dawn in sight. Into one such nightmare, a child was born–late at night in fact–so that we would know we are not alone. It wasn’t a birth story meant to be told only at Christmastime: it was a story meant to be told every night at bedtime, in every place where the terrors gather in force, for every hour when the nightmares spill over into the day, through every season of war and lies and power politics, and to every child (of any age) who cannot sleep. It is a story that promises:

At night most of all, you are not alone.

Prince of Peace,
your peace is like a river:

flowing
bubbling
tumbling
spilling into life with a rush
pouring with happiness and busyness and richness and fullness
welling up over rocks and hard places
leaping
bounding
dashing
rushing over waterfalls
laughing
delighting in movement and quickness
splashing at your feet with joy and thanks.

Prince of Peace,
your peace is like a river:

Prince of Peace,
your peace is like a river.

Lord of all, to Thee I raise
This a hymn of grateful praise**

Lord of all, to Thee I raise
This a hymn of grateful praise

Lord of all, to Thee I raise
This a hymn of grateful praise 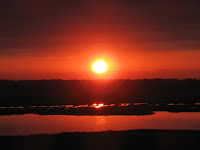