My name is Rahab.

I once owned a house in the city of Jericho, a modest place with a view of the countryside and a rooftop patio that was ideal for sleeping outside on warm nights. My home was hardly the best of Jericho’s real estate, but it was much more than most women could afford.

I had the good fortune to own this home in Jericho because I am a proficient woman in what is called “the world’s oldest profession.” There are those who scorn the way that I make money; they tell me that I am guilty of perpetuating original sin. Perhaps. But what really is the first original sin? Nakedness? Sexual desire? Thirst for divine knowledge? Whatever you might understand original sin to be, it seems to me that the result of original sin is loneliness. So I don’t think that I continue original sin; my job is to meet the need of sin’s consequence. I provide a service to the lonely.

Life has been good to me, as much as it can be. I am a woman with prestige, although you wouldn’t know it if you saw me walking down the streets of Jericho. I knew many men there, although they couldn’t acknowledge me publicly. I lived comfortably in the city — not the lap of luxury by any means — but I was pleased to be able to provide for my father and mother, for my sisters and brothers, and for their families. I consider myself to be a fortunate woman.

I have come to accept the words, the slurs, the innuendos, that people say about me. Do you know that not even my name is my own? Those who will someday write my story have given me this nickname — Rahab — which means “wide” or “broad.” I am a shapely woman, but that’s not the intended nuance of my name. My name is a sexual pun, although I’ll save you the embarrassment of an explanation. But when the scribes someday write my story for generations to read, understand that their story is about “a broad.” To them, I will always be defined by my prostitution.

Their business was typical and their money was good, so I was surprised when the king of the city identified them as spies and demanded their extradition from my home. As a businesswoman, the anonymity of my male customers is a vital tool of my trade — whether dignitary or commoner, spy or servant. So I hid the two foreigners on my roof for the remainder of the night.

A woman’s intuition and perception are two of her greatest assets (among others), and I take pride in how I play the game of survival among men. In those days, our city of Jericho was increasingly the object of siege and attack, and although it was good for my business, clearly our city’s age of independence was waning. The two spies in my house came from an army that had a reputation of having a strong god on their side. Rumor had it that their god had rescued them from slavery, and moved the waters of a sea for their safe passage. So if this god Yahweh conquered pharaohs and commanded the seas…and the two men in my house were in allegiance with this god…then they were men to negotiate with.

Although I was asking them for a significant favor for myself and my family, a woman in my trade actually holds quite a bit of power with her customers. These two men — men who could rescue me when Jericho finally fell, men who would not preserve my real name in their storytelling, men who left me at risk of being discovered by my king and charged with treason — these men and their mission were actually at my disposal. They were men working for their god, yet at that moment, you might say that I was the one working for their god, that I was helping and rescuing those two men on behalf of their god.

And so, with an oath between us, I helped the spies escape from Jericho through my window, with directions for their safe travel through the countryside. When the time came, the army of Yahweh surrounded our city. They marched and blew their horns, and the great Jericho was reduced to rubble and dust. My family was rescued according to the promise of the spies. My father and mother, my sisters and brothers, and their families, were relieved to be saved…from Jericho and ultimately from me, from the shame of my business. They could — and did — move on with their lives and settle among the Israelites.

Nowadays, there are those who consider me a matriarch, believe it or not. I have to laugh! They have taken my description and my profession, and turned them into a sanitized name, “Rahab The Prostitute”: first name, middle initial, last name. Matthew 1:1-16 considers me a matriarch in the grand lineage of King David and Jesus the Christ. Perhaps I am. Perhaps I “settled down” after my wild days in Jericho, became obedient to a husband, and gave birth to bright-eyed children…who in turn grew up and had their own bright-eyed children who I bounced on my knee and hugged like the best of grandmothers. Or perhaps I am a matriarch of faith, as they say in Hebrews 11, a woman who was so impressed by two men and their army’s power that I converted to a belief in their god.

Perhaps you could call me a matriarch. Or you might just call me “a broad.”

“I’m not impressed, however, by all this good and posthumous publicity, in fact, religious propaganda. First they make fun of me by nicknaming me ‘The Broad’; then they forget about me, only to domesticate me in the service of their ideologies.”2 In actuality, my story is like the stories of many women of both biblical times and modern times —

women who are unnamed, mocked, soiled,
and then resurrected as converts, matriarchs and saints.

Women who fit into history only as
the vehicles of sexual sin or the bearers of strong sons.

Women who teach survival to their daughters.

Shiphrah and Puah.
Zipporah and Abigail.
Ruth and Naomi.
Dinah and Tamar.

Women who build and gather for tomorrow. 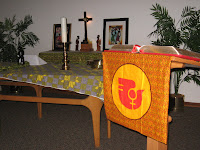