A pastor from a nearby congregation recently stopped by my church office, unplanned, unannounced, to introduce himself and talk “shop.” Our church administrative assistant showed him upstairs to my office, and I stood to introduce myself: “Good morning, I’m Rachel.” The visiting pastor, an older white male, noticeably did a double-take. “You’re the pastor here?” No kidding. All of my feminism alarms started blaring. Aloud: “Yes, I am. Come in to my office. Please, have a seat.”

We live in a world of binary partitions: On and off. Strong and weak. Black and white. Up and down. Left and right. Right and wrong. Bad and good. Self and other. Broken and whole. Male and female. Computers use a binary code, zero and one. Thank goodness that Noah (of biblical ark fame) taught us to count in twos!

Usually one of the two is endowed with a value of superiority. “She’s really on today” implies that someone is performing her tasks well, far better than being off. White beauty is valued over Black beauty, and light complexion is more favored than dark (the notable exception being whites’ obsession with tanning, an enigma in itself). We are self-focused to the point of othering without even noticing that we have done so. Good behavior is rewarded over bad—and not just criminal bad, but any “bad” that contradicts or questions or challenges. And, no surprise here, male is valued over female.

Anything that doesn’t fit into a neat duality is seen as problematic (because it cannot be “properly” assessed with a value). Consider the story of Caster Semenya, the 18-year-old South African woman and runner who has been setting records with her speed. How can she run so fast, how can she be so good? Critics suspected that she must secretly be a male, and they demanded an examination of her sexual organs. More than a strip search: a gynecological exam. It’s problematic at every angle: the assumption that a woman cannot be a strong athlete without testosterone; the insistence that she “spread ’em” to satisfy critics; and the inevitable debate (if indeed the leaked results are true that Semenya is biologically a hermaphrodite) over whether she may continue to compete in women’s track and whether Semenya will be “allowed” to name her own gender identity in life and in sports now that it has been splashed all over the news.

Another debate that challenges our binary assumptions (though it’s been moved temporarily to the back burner while racism and fear undermine the debate over health care reform): gay marriage. Many who protest the legalization of same-gender-loving marriages insist that “marriage = man + woman,” that is, marriage is defined by the gender binary. Not by love, not by commitment, but by the dichotomy of sex. And by gender roles. Detractors of gay marriage cannot imagine “husband” without “wife.” Who will be the gentle nurturer? Who will be the strong bread-winner? Gender roles are binary, too, inside and outside of marriage…

…which brings me back to the pastor sitting across from me in my office, recovering from his surprise at the discovery of a “break” in the gender roles (in the Church of all places, that sanctuary of strict gender roles). 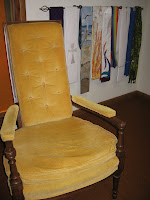 While he proceeded to tell me why he was visiting and what he was hoping to learn from his informal survey of area churches, I talked myself down from feminist indignation so that I could genuinely engage in the conversation. Being defensive was certainly an option in that moment…but so was going on the offensive. You know that phrase, “wise as a serpent, gentle as a dove”? Professionally, I spend a lot of time doing “dove,” but I’m no stranger to “serpent.” If this neighborly pastor was surprised to meet a female solo pastor, what else might surprise him? The possibilities were endless for a “teachable moment”!

Our polite conversation continued, and into my office walked Surprise #2 for my ministerial colleague: tall, lean, bubbling with energy, dark-skinned from her Kenyan father and from the summer’s sun, curly hair unfettered and natural: my 7-year-old daughter. My 10-year-old son entered shortly after his sister. As I excused myself to talk with my kids, I watched my visitor out of the corner of my eye as he “did the math” in his mind. It’s a familiar look to those of us with interracial families, and you can almost see the sequence of questions behind the eyes:
Oh!
Are they her children? Hm.
Do they look like her? Kinda.
But if she gave birth to them, then that means… OH!
When we’re out with an African or African American friend, it’s not unusual for someone to assume that my kids are part of that friend’s biological family. Gentle as a dove, Rachel, gentle as a dove.

My kids returned to the Sunday School room where they’d been playing, and I decided that it was time to pull out Surprise #3. We’d been talking about churches: what works and what doesn’t work, comparing programs, etc. But so far nothing had been said about the formation (or continued shaping) of a church’s overall identity.

“There are many ways in which Grace is like other Protestant congregations,” I said in response to one of his questions. “But in this conservative region, what sets us apart isn’t our programs; it’s our overall identity as a socially and theologically progressive congregation.”
“Really? What do you mean by ‘progressive’?”
“Well, for example, we fully welcome LGBT persons in the life of the church. We have a lot of non-traditional families who find a home here. We rarely use male pronouns for God in worship, and sometimes we use female pronouns. We have members who talk about Jesus as Lord-and-Savior, and members who talk about Jesus as a prophetic but fully human teacher.”
“Oh.” (quick note-taking)
“Mm-hm.”
“So, your church welcomes people who…maybe…don’t feel comfortable in other churches?” (raised eyebrows)
“Yes we do, and that inclusive welcome is the identifying character underlying our worship, our programs, our small groups, etc.”

Female pastor. Non-white kids. LGBT-affirming congregation. Non-traditional households and unfamiliar liturgies. Female pronouns for God. Teachable moments all over! It was all very civil, mind you, a totally polite conversation between two colleagues. Me, seeing how many surprises I could throw; him, taking notes and nodding. We drew our chitchat to a close, and he asked one last question: “I see that you’re not wearing a ring. Are you married?”

(Cue my daughter’s voice in my mind, saying Oh no you DI-NT!)

My feminism flares went up again: he might as well have asked about my weight and age. Really, in what social setting are you supposed to ask a woman these things? We were back to square one, and I was debating my dove-serpent responses all over again. Polite honesty or polite decline? Dove-like professional refusal or serpent-like professional rebuttal? And tell me why you’re still in my office, chatting like you take me seriously when I know that your denomination limits women’s opportunities for fully ordained ministry?!

I have women colleagues, dear friends, who cannot get a call to ordained ministry. Correction: they already have a call to ordained ministry–God’s call—but they can’t find a church willing to affirm it. Why? Because collectively we have binary vision. Because our binaries are value-laden, and poorly so. Because we still insist on strict gender roles: in church leadership, in relationships, in skills and in sports…and (apparently) in polite conversation.

So: in good, obedient, gentle female, dove-like fashion, I’ll keep enjoying the opportunity to be a sly serpent whenever a “teachable moment” presents itself!

Damn the binaries, full speed ahead! 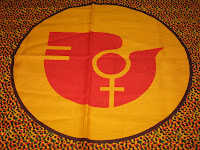 I am my own worst enemy;
save me, o God.
Chase down the voice that mocks and belittles
in my mind.
Like a pack of wild dogs on the hunt,
track down that sly fox of critical self-doubt
until it is flushed from its hiding place in my soul.
In other words:
hunt me down, o God.
Take aim equally at my pride and my self-effacement.
When frustration and discouragement set a trap against
my well-being,
let the trap be sprung against them instead.
When self-care evades me like a thief in the night,
release your angels in hot pursuit of the culprit
and bring me peace.
How long will you wait, o God,
to deliver this battle into my hand?
Rescue me,
and I will proclaim your goodness, saying
“The LORD is my salvation and my wholeness,
my grace and my peace of mind.”