May I walk intentionally today

nor deadened by cynicism
to grace & wonder
all around.

To God’s glory and praise. 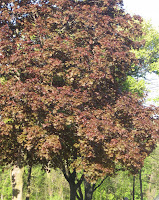 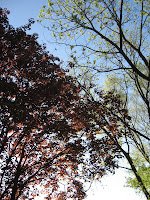 And on those days when I struggle to understand the irrepressible nature, the endlessly patient character, and the wholly mysterious being of God… 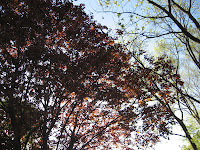 …the purple maple tree reminds me that my daughter and God have something wonderfully in common: they both have the imagination (far beyond my understanding) for purple trees! 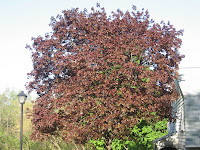 The Language of God

I am frustrated and fed up with groups like Westboro Baptist Church that continue to call themselves “Church” or people like those in the Hutaree Militia who call themselves “Christians.” For too long, theological conservativism has gone unquestioningly hand-in-hand with social & political conservativism in American Christianity, resulting in the disastrous usurping of church language (words like “Christian” and “salvation” and “conversion”) by an extreme and increasingly malevolent political agenda.

I am embarrassed and appalled as a Christian to carry the same name as Pat Robertson, James Dobson, Diane Gramley (of “Out in the Silence” fame, or is it infamy?), and the like. Hatred and violence and the politics of fear were never never part of the ministry of Jesus, yet often in the public arena when someone mentions “Christian,” people think of these persons first and foremost — before Mother Theresa, before Martin Luther King, Jr., before their local churches that contribute to food banks and organize clothing drives and serve great spaghetti dinners.

We may disagree on theology, on the meaning of incarnation, on political issues of abortion and gay marriage and health care — these disagreements are to be expected within the Church, even though I grow tired of the arguments — but if you issue death threats to politicians who support health care reform and if you condone (overtly or covertly) the murder of Dr. George Tiller, then you have nothing to do with Jesus Christ. Period.

You have already taken words of faith like “Savior” and “salvation” — important words that should be used to indicate Jesus’ actions of healing and border-crossing and reconciliation — and twisted them up into such contortions that no one (outside or inside of the church) thinks that “salvation” relates to anything but heaven & hell & damnation. Words like these have become codes that, when used in public, say nothing about your Jesus and everything about your politics. If I say “Jesus is my Savior” in the public sphere, people assume that I am pro-life and pro-traditional marriage (not to mention pro-NRA and pro-war and pro-death penalty); in fact, I am none of these….consequently, I do not say “Jesus is my Savior” in public anymore.

But I refuse to concede any further church language to you. I will continue to call myself Christian. I will continue to preach Jesus. And every time the opportunity arises, I will redefine in the public sphere what it means to be “Church” because Westboro Baptist is not a church and Dr. Dobson does not promote the Body of Christ. At every opportunity, I will draw very direct lines between those “Christians” who preach and/or condone hatred…and those “Christians” who enact that same hatred through violence (domestic terrorism). I’m not interested in the details, like whether or not you are personally stockpiling an arsenal of weapons or marching in the streets with a “God hates gays” sign; if you speak violently in the name of faith, I will always connect you to those who behave violently in the name of faith.

But I will not surrender my language of faith to your politics of fear.